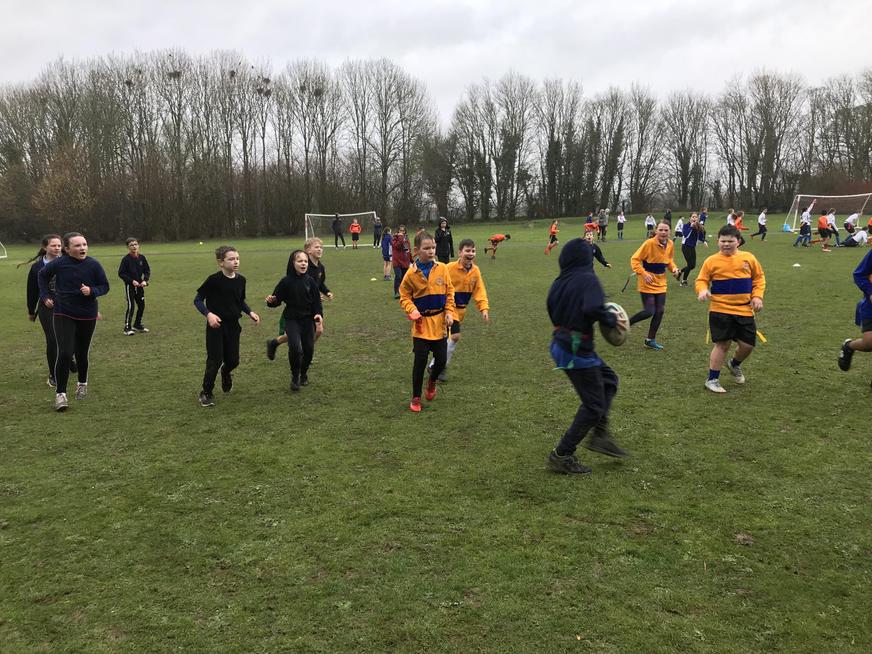 On a very wet Friday morning, on 11th March, 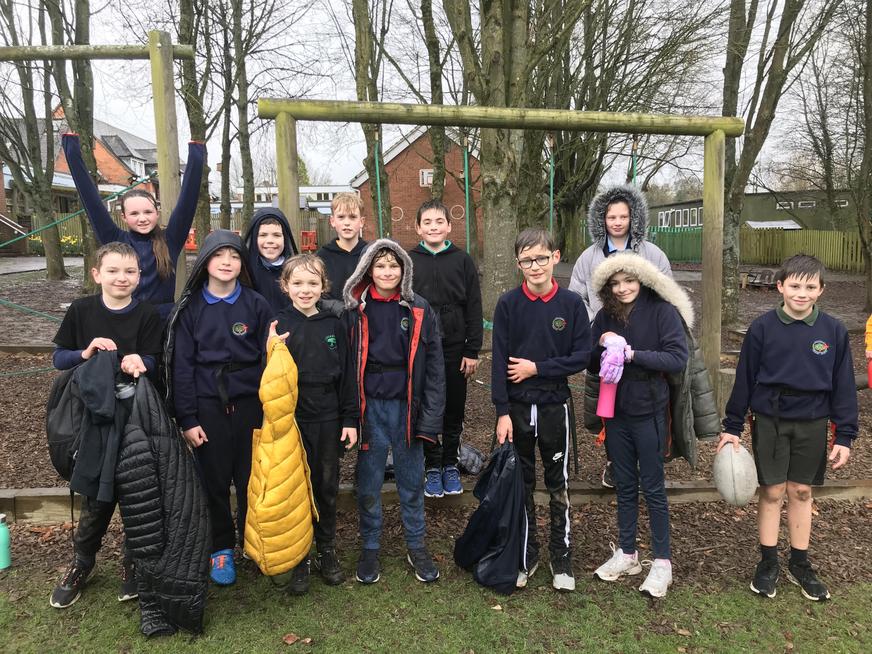 On Tuesday 5th October we entered our first inter school event for almost 2 years. Although numbers were more limited than in previous years, 16 children went to Wallop Primary School to represent years 3-6 at the cross country event.

It was so great to be all back together and the atmosphere was very lively and supportive and it was clear that the children were all happy to be back competing. After a little pep talk and description of the course year 3s kicked off the event with Eleanor and Jess R running in the first event. They smiled the whole way round and did really well! Next, Stanley and Leo took to the course and ran really soundly with Stanley medalling in 3rd position. Representing year 4 we had Fiona, Jess S, Lola, James S and Rowan who all ran superbly.

For the older children, the distance increased and they had to run 2 laps of the course. Having seen the younger ones go off fast at the beginning they learned from this and paced themselves well around the long course. Joe, Max, Nieve, Elsie, Tellina, Holly, Adam and Arran all ran excellent races with Arran finishing off the event for us with a flying finish in 1st place!

The children did extremely well, with this being the first ever event for some and the first in a very long time for everyone. Overall, we finished in joint 3rd place which Mrs Clark and Mrs Appleby were very pleased with!

This week 8 KS1 children attended the Gymnastic Festival at Test Valley School. The children had lots of fun completing activities such as rhythmic gymnastics run by Test Valley pupils.  They had also been practising a routine to perform at the festival which was then judged. The children performed brilliantly and Lockerley Primary School came home with bronze medals! Well done children.

Last week our Football Team attended a football competition at Wallop Primary School. The children played really well and showed excellent team spirit. We won 4 games and lost 2. At the end of the competition when all the teams came together, we were told it was very close between the teams. There were 3 teams in third position so they had to count back on goal difference. We are really pleased to say the Lockerley came third and were awarded bronze medals.

Thank you to Wallop for hosting the event and for Mrs Cavill who supervised the team at the event.

We had a brand new cluster competition this year - New Age Kurling.

On Monday, Y3 & Y4 children went to Test Valley School to participate in a New Age Kurling Competition. Lockerley did us proud, wonderfully supportive of each other and they picked up the game and some tactical moves along the way!

The following week a team of 4 children from KS1 went to Test Valley School to take part in a New Age Kurling Competition. They learnt the skills of the game very quickly. They children listened to the instructions from the Yr10 coaches and I'm really pleased to say the children won the competition.

The first competition for 2019 was the Girls Indoor Football competition at Test Valley. Team captain Grace organised the team including a last minute substitution and there was lots of talk leading up to the event regarding tactics.

We played the first two matches back to back with Robyn in goal performing some amazing saves. Unfortunately we were defeated in the first game and drew the second game 0-0 so the girls spent the next three matches while they were off watching the competition and discussing ways to improve their game.

The following two matches saw Iris in goal, again with some fabulous saves. I noticed a vast improvement in how they played, being much more involved in the game, supporting each other and being much braver with their attacking and tackling.

In the final game Grace scored an amazing goal from the top of the D but sadly it was disallowed as her foot was sightly inside the D. We were all delighted that a goal had been scored!

A superb effort from Grace, Robyn, Milly, Iris, Imogen and Ellie D. You played superbly as a team for the first time ever and showed fantastic team work. If the competition was on again tomorrow I think the results would be very different as you were just starting to find your feet - well done girls.

8 children from swallowtails class went  to Broughton on Wednesday afternoon to take part in a tri golf festival. This is a festival that gives children the opportunity to 'have a go' at some golf in a friendly scenario.

There were 6 activities set up around the school playground and field run by some young leaders from Broughton school and scored by the Sports Leaders from Test Valley. The children had a go on the driving range first where they enjoyed hitting the ball as hard as they could down the field! They also got to practise their aiming and putting, where Freddie got a superb hole in one!

16 children represented Lockerley Primary School this morning at the area athletics from Years 3 - 6. It was a full on morning with track and field events including, 300m race, vortex throw, standing long jump and speed bounce. All of the children competed well, showing several strengths early on. Overall we came first. This adds a fifth trophy and more gold medals to our other sporting successes this year. An absolutely amazing achievement. Thank you to all of the parents that came along to support us and transported children there. It is safe to say I have a sore throat from all of the cheering. Check out our photographs below.

It was a beautiful afternoon on Wednesday when 11 of Lockerley's finest athletes travelled to Test Valley for the rounders tournament. Being off for the first match gave us the chance to suss out the opposition and talk tactics before our first match against Wallop.

Fielding first helped the children settle into the game before taking on the role of batting and knocking a few balls long distance to help score our first full rounder. Winning the first match gave the team a confidence boost and enabled them to take on the next 5 matches in a row with vigour and enthusiasm.

There was some superb bowling from Hugh throughout the competition; not to mention some excellent team fielding on second base from Josh, Aston, Aaron, Toby and Morgan stopping every team from scoring a half round when they could. The backing up that they had been practising in PE was well utilised by Henry, Ben S and Ben T to stump people out and stop rounders.

As well as lots of full rounders being scored from big hits Primrose and Lily hit some great shots and got to second base in order to secure those all important half rounders.

Another victory for Team Lockerley. Well done team, a superb effort all round and some really outstanding teamwork was on show for all to see.

Yesterday our football team took part in the area football tournament at Wallop Primary School. The team won 5 out of the 6 games with no goals conceded. The children showed incredible commitment, enthusiasm and teamwork and fully deserved to bring the trophy back to Lockerley! Thank you to all the parents who helped with transport and stayed to support the children! Thank you also to Mr Cooke for coaching the children and practising with them at lunchtimes. A huge well done from Mr Dodson to Aaron, Aston, Henry, Ben S, Ben T, Toby, Hugh and George.

Well done to all the children who took part in the netball event on Wednesday this week. They performed brilliantly as a team, winning four consecutive matches and losing just one. Lockerley v Wallop – 4-1 (Toby and Primrose with 2 points each)

Broughton beat us 14-1 a month ago. Revenge is indeed a dish best served cold.

Lockerley v Stockbridge 0-1 (our only defeat)

A team of 6 basketball superstars went to Test Valley after school yesterday to compete in the annual inter-school competition. Fresh from their skills coaching just before half term Toby, Maddie, Aaron, Aston, Ellie and Alexis were hungry for victory.

The team started well with a win over Wallop and with another win in our next match the team started to think they could be in with a chance. After a short break they had 4 back to back matches. They showed some very impressive stealing and dribbling and worked really well as a team to back each other up to get the ball to a shooting position. There was some phenomenal shooting with a point for every time they hit the backboard and many 3 pointers were scored where the ball hit the backboard and went in.

As we eagerly awaited the final scores the team were praised for their all around skills and for scoring an average of over 20 points per match. I think it's safe to say it was a landslide victory for Team Lockerley with a very well deserved trophy and medals all round.

This afternoon, children from Emperors went to the 'Dare to Believe' Festival at Testwood Secondary School in Totton. The purpose of the event was to introduce children to sports that they may not have come across before or played. The majority of the activities were sports played in the Paralympics. The children even got to meet a real life Paralympian, Kate Grey, who was a swimmer. Check out the photographs below of our fun afternoon.

An amazing effort by the eight children that attended the Indoor Athletics competition at Test Valley school today. They took part in many events including javelin, triple jump and running events. Overall we came in 4th place with some very strong performances. Check out our photographs below. Thank you to all of the parents that helped us transport children too.

19 children from years 3-6 travelled to Test Valley School on a sunny, if not slightly chilly, Wednesday afternoon. After the children had warmed up with the Sport Leaders the event started with Oscar running in the Year 3 fun run. He ran a very relaxed race smiling his way around the course.

Next followed the competition events with girls and boys from Years 4-6 taking part in consecutive events. Grace, along with Lucy and Flora racing for the year 4s, were the first to compete and did a sterling job. Freddie won Gold for the year 4 boys with George and Sebastien running solid races. We continued on the winning streak with Maddie striding out at the front and bringing in another Gold medal. Then Aaron and Henry ran another Gold, Silver duo exactly as they had done at this event last year!

I was so impressed with the attitude of all of the children that took part in the event. They all ran their hearts out, supported each other and smiled, most of the way round! It was superb to take some new competitors to this event and, for some children, give them the opportunity to represent the school at their first sporting event. You should all be very proud of your achievements for Lockerley Sports Team - well done everyone.